The Winter Championships traditionally bring the Malaga bowling season to a close.
Held this season at Lauro Golf Bowls Club, near Alhaurin, the Championships attracted 254 entries across the range of disciplines.
As always the bowling at this level was of the highest standard and throughout the 13 day Championship schedule there were some wonderful displays of skill from all of the competitors.
It was the Finals, though, that brought out the excitement and lifted the crowd. Because several competitors had reached more than one Final it was necessary to stagger the disciplines over two days with the Ladies Triples being contested on Saturday afternoon.

Ladies Triples
An experienced team of Pat Fisher, Brig Gunn and Simone Morgan from Santa Maria BC showed why they were the favourites as they raced into an early lead and at 10-2 up looked clear winners.
However Konstance Christensen – who won the title last year - and her less experienced team mates Jane Richardson and June Baldry, all from Lauro Golf BC, refused to give up.
Gradually they reduced the lead until on the 18th end they managed to secure 2 shots to make the game 17-17 and force an extra end. Konstance, finding herself 2 down managed to bowl the perfect delivery to trail the jack a few inches to take shot and victory – the only time in the match her team had been in the lead!
Winners: Konstance Christensen, Jane Richardson, June Baldry (Lauro Golf BC)
Runners-Up: Pat Fisher, Brig Gunn and Simone Morgan (Santa Maria BC)

On Sunday morning an appreciative crowd gathered to watch the Finals of the Mixed Fours, Men’s Pairs, Men’s Triples and Ladies Singles, while in the afternoon there were the Men’s Singles and Ladies Pairs Finals.

Men’s Pairs
The Lauro Golf BC pair of Spanish International Tom Rogers and Phil Baldry were probably slight favourites to win this match against La Posada BC pair of Barry Ellis and Jeff Rowe and in the event that proved to be the case. Phil bowled consistently well as Lead and when he needed to Tom played some excellent conversion shots to put pressure on the La Posada pair from the beginning and never relaxed their grip on the game. Well behind, Barry and Jeff conceded on the 15th end.
Winners: Tom Rogers and Phil Baldry (Lauro Golf BC)
Runners-Up: Barry Ellis and Jeff Rowe (La Posada BC)

Mixed Fours
This was another exciting Final. The Miraflores BC team had to make a last minute substitution as John Porter sprained his ankle and was unable to compete in the Final so Bill Gregory was called into action for the high pressure game.
They team held a comfortable lead right up until the 15th end when, at 13-10 they dropped 5 shots to give their opponents from Don Pablo BC an unexpected advantage of a 2 shot lead going into the final 2 ends. Tension mounted as, in the last end still one shot behind, Miraflores held a one shot lead until Don Pablo Skip Gary Aldridge delivered his last bowl. For an agonising few seconds it looked as if he had drawn shot only for the bowl to fall backwards and out of the count, forcing an extra end!
The extra end proved as just as memorable as the lead changed hands several times before Gary was able to deliver the winning bowl right at the death.
Winners: Gary Aldridge, Jeff Turner, Geoff Edgington and Jenny Aldridge (Don Pablo BC)
Runners Up: Dennis Handley, Bill Gregory, Denise Porter and Esther Gatter (Miraflores BC) 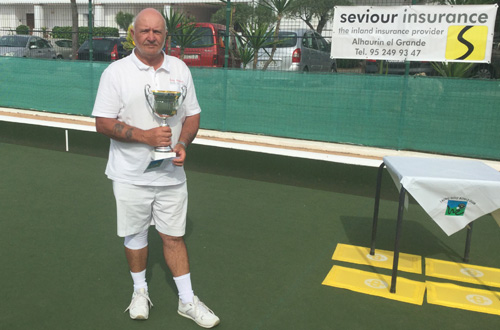 Ladies Pairs
Ladies Triples Winners and home crowd favourites, June Baldry and Jane Richardson faced Mixed Fours Winner Jenny Aldridge and Pauline Ball in what started out as a tense and close match, with both teams scoring points early on and the overall score changing end by end.
Gradually however, June found her rhythm and added to some excellent bowls from her Skip they began to exert pressure on their opponents.
Supported by a vocal section of the home crowd - who also applauded generously the good bowling of their opponents – they gradually increased their lead until they finally ran out comfortable winners.
Winners: June Baldry and Jane Richardson (Lauro Golf BC)
Runners Up: Jenny Aldridge and Pauline Ball (Don Pablo BC)

Ladies Singles
The very experienced Spanish International Margaret Kain got off to a very strong start, before her opponent June Baldry - playing in the second of her 3 finals - began to fight back.
Some really excellent bowling by both players nevertheless saw June claw her way back into the game until it was tied at 18-18.
Margaret has faced this kind of pressure many times in the past and refused to panic, kept bowling steadily and consistently good bowls and managed to reach the magic 21 points winning total at last.
Winner: Margaret Kain (Miraflores BC)
Runner Up: June Baldry (Lauro Golf BC)

Men’s Singles
Having played each other in the Mixed Four’s in the morning Gary Aldridge and Bill Gregory faced off in the Singles Final in the afternoon.
Gary is a familiar face in the Winner’s circle and few tournaments go by when he doesn’t take a win in at least one discipline.
Bill on the other hand was playing in his first major Singles Final but you would not have known that from his opening.
Throughout the Championship Bill had played strong, consistent bowls, finding his weight early and keeping up the pressure right through the games. This Final was no exception.
Racing into an early lead only to find himself pegged back to 12-12, then taking the lead again only to find himself pegged back again to 18-18, the game followed the pattern of almost all of his earlier matches.
However in this case Gary wasn’t going to be outplayed and his years of experience allowed him to keep his head and play some excellent shots of his own. None more crucial than on the 28th end with the score 18-20 to Bill and Bill holding match lie with a bowl inches from the Jack, Gary came in with his final delivery with just enough weight to push the shot bowl through and leave himself with a match winning 3 shots of his own.
Bill had the opportunity with his last bowl to reduce the deficit but agonisingly the bowl just drifted past.
Winner: Gary Aldridge (Don Pablo BC)
Runner Up: Bill Gregory (Miraflores BC)

The Federation's Malaga Delegado / Chairman Ron Jones, presented the Trophies and prizes to the Winners and Runners Up and Gary Aldridge, on behalf of the players thanked Lauro Golf Bowls Club for their hospitality and all the work put in by their Members, Trevor Burgin and Ray Nelson for the smooth running and organisation of the Competition, the Umpires and Markers Association for officiating and the crowds who turned up throughout the 13 day event.
Congratulations to all who took part and very special congratulations to our very own Lauro Golf Bowls Club Members who did the Club proud.

We can also be proud of the effort put in by our Members. The overwhelming story of the Tournament, apart from the bowling, was how well Lauro Golf BC looked after their guests. The helpful, friendly attitude of everyone who helped out, the excellent food and the surprise supply of a variety of free cakes on Finals Day all went towards cementing our reputation as "the friendly Club". Well done to everyone involved. 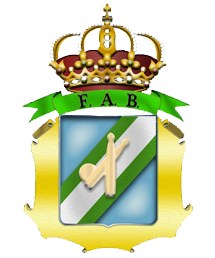