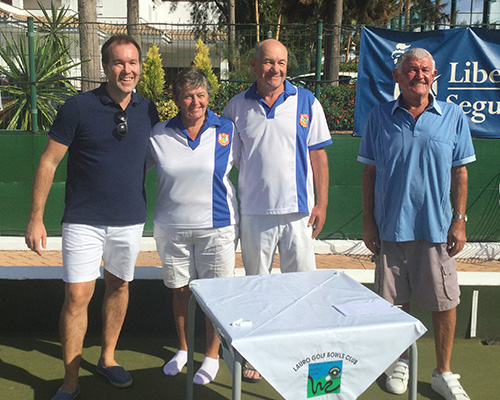 The Lauro Festival has been the premier Club Competition in Malaga province for many years.
Traditionally the first Club Competition of the new season it always attracts a large entry to play.
Held at Lauro Golf Bowls Club near Alhaurin de la Torre, the 8 day event was blessed with unusually warm October weather.

The Festival started on Saturday morning with the Open Fours discipline. The early rounds saw some unexpected results  - none more so than the defeats of Santa Maria stalwarts Gordon and Margaret Kain, Bill Gregory and Brig Dunn followed in the next round by another win against Benalmadena legend Joe Stamper, John Sullivan and  Jim and Mercedes Neilson, both teams beaten by La Posada team of Alan Gateshill, Nick Cummiins, Tony and Ann Brooker.   Sadly the Semi-Final proved a game too far as they came up against the Lauro Golf Bowls Club juggernauts of Graham Jarrett, Paul Hughes, Julian Thomas and Kevin Westwell, who strolled to their third victory scoring more than 20 points in each of them.

In the other half of the draw, a bye in the first round followed by a very tough extra end win saw Tom Rogers, John and Dine Warne and June Baldry take an easy win in their Semi-Final against Lauro’s Trevor Burgin, Tony Frostik, Colin Herbert and Brian Freeman.

The Final was a classic. Both teams playing well with the scores favouring the Santa Maria team despite a strong come back from Lauro bringing the game level before an unexpected 5 clinched the match. Congratulations to Tom Rogers, John and Dine Warne and June Baldry for a deserved win.

In the Open Triples the highlight of the first round was Alan Gateshill, Nick Cummins and Tony Brooker’s  last end  1 shot victory against Tom Rogers and Gordon and Margaret Kain. The rest of the games went pretty much to form with the Final featuring  Graham Jarrett, Paul Hughes and Kevin Westwell against Joe Stamper, John Sullivan and  Jim Neilson.  As it turned out the Lauro team outbowleed their opponents to win a deserved title.
Congratrulaions to Graham Jarrett, Paul Hughes and Kevin Westwell.

The Open Pairs attracted the largest entry with 32 teams competing for the title. Through the early rounds 4 teams looked  very strong and it was no surprise that they won through to the semi-finals. John Warne and Bill Gregory played with little fuss, great aplomb  and a lot of skill to earn their place against John Sullivan and Joe Stamper who had come through two close games, winning  on the last end in both of them. Their Semi-Final was just as tense, with John and Bill edging ahead to win 21-20, coming from behind all the way.
The other Semi-Final saw last minute entrants Bill Davies and Malcolm Greenwood – who had won comfortable victories against Gordon and Margaret Kain and Tom Rogers and Craig Lewis in the previous two rounds – facing the Mijas pair of John and Sheila Wilson who had recorded fairly straightforward wins in every round so far. As it turned out the Semi-Final would be no exception and they were more comfortable winners than many of the spectators had anticipated, with the 21-8 scoreline not flattering them.

The Final was another exciting game for the impartial spectators. The ever reliable Bill Gregory and the unflappable John Warne fought for every end but were unable to overcome the consistency of  John and Shelia Wilson who were worthy 17-12 winners. Congratulations to them both.

Presentations of Prizes were made by Mark Seviour from sponsors Seviour Insurance, before everyone enjoyed the free Lauro Buffet, provided by the Club for competitors and players alike.

As always we are extremely grateful to our sponsors Seviour Insurance and invite you to visit them at thei offices in Alhaurin el Grande and Benalmadena and to look at their website by clicking on their logo.