TEMPORARY CLUB CLOSURE - 14th March
In a rapidly developing situation the President of Spain today announced emergency measure to try to counter the Corona Virus.
As of today, freedom of movement will be severely restricted with citizens required to stay at home for the next 15 days.
All Bars, Restaurants, Municipal buildings, Sports venues, Beaches, Water Sports sites and public gatherings will be closed as of 17.00 today.
In compliance with that decree the Committee met today (14th March) and agreed that we had a duty of care to our Club Members, most of whom are in the "high risk" group.
As a result it was decided that the Club will be closed with immediate effect until at least the 29th March.

Mac Roberts Trophy
Congratulations to this year's Winner: Kevin Westwell
Sponsored by Malcolm Roberts, this 2 Bowl Singles is one of the two competitions which utilise the Club's handicaps.
Details of the Competition can be found Here

League Season Finishes.
Lions and Bobcats both take 2nd place in their leagues
After a tough camapign both the Lions and Bobcats were able to take second place in their respective leagues. Well done to everyone who took part in their successes.
Our injury ravaged Tigers team struggled as expected and ended up a lowly 5th. Next season will, hopefully, see them challenging for the top spot once more. 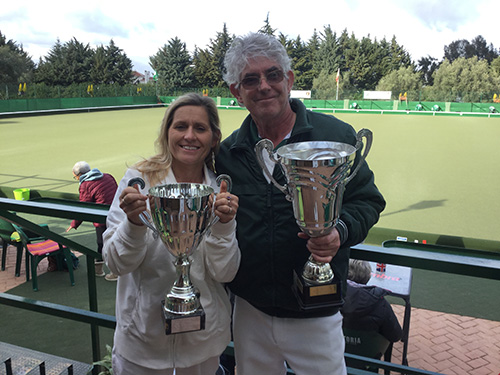 The Club Singles Championships will be drawn on Sunday 2nd and the first round will be played on Monday 3rd January. The web page with results round by round can be seen Here 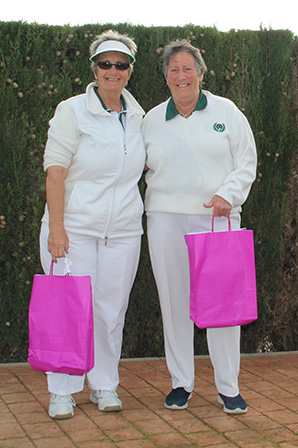 Sue and Jenny
Congratulations to Jenny Parkin and Sue Jones for being runners-up in the Malaga Ladies 2 Bowls Pairs Competitions on 29th January.
For more details see the Malaga FAB Website report Here

Club Drawn Triples.
Congratulations to this year's Winners: Ron J, Konstanse and Chrystal
The Triples will be drawn on Sunday 5th and the first round will be played on Monday 6th January. The web page with results round by round can be seen Here

Merry Christmas to All our Members and Visitors

Australian Pairs.
Congratulations to this year's Winners: Gordon & Kristina
This year the first Club Competition of the Season is the Australian Pairs. The draw for teams was made Tuesday 10th and the competition runs on 11th and 12th. The web page with results round by round can be seen Here

Club Competitions Due to Start Soon.
Competition Secretary Trevor Burgin is preparing to announce the schedule for this season's Club Competitions.
Information about the Competitions can be found Here and the page will be updated to include dates and details of the competitions as they are received.

League Season Gets Under Way.
All three Leagues are now fully under way. In the Tigers the team is doing well and is 8 points ahead of the same games last year, despite only winning one of the first three games. Close defeats to Santa Maria (Home) and Benavista (Away) and a win against Miraflores (Away) - a match we lost last year - sees our Tigers team looking to climb the table in the next few matches.
In the Lions League, two superb 10-0 victories and a close 3-7 away defeat to Santa Maria keeps us in second place, just 2 points behind the league leaders.
In the newly formed Jaguars league our Bobcats team is performng even better than expected. With only 8 points at stake each week they have won both of their opening fixtures - including a very impresive 7-1 victory over title favourites Santa Maria to put them top of the league by 4 points.
For full results see the Malaga Web site where all results and the latest tables are updated each Saturday.

29th Sept 2019 - Andalucian's Once Again Bring Success to Lauro Bowlers
Congratulations to Kevin Westwell for his stunning vistory in this year's Andalucian Championships. Kevin has a reputation as a specialist Singles player and proved it once again with a 21-2 victory against Santa Maria's Craig Lewis - no slouch in the Singles game himself.
Elsewhere in the Championships saw Julian Thomas win his THIRD Mixed Fours Title - with three different teams. Congratulations to him and his Santa Maria Team mates.
In the Men's Pairs we were unlucky not to be celebrating another title whenKevin Westwell and last year's Singles Champion Marcus Smith took the Final game to TWO extra ends before losing to a Craig Lewis and Phil Baldry 15-16. Very well done to both our players.
For more information and a full list of results see the Malaga FAB website:Andalucian's

19 Sept 2019 - 24 Hour Bowls Marathon raises 2300€
Despite having to be delayed following the unprecedented storms and flooding overnight the 24 Hour Bowls Marathon went ahead the following day.
6 Club Members bowled in 12 two hour Triples games against teams of mixed abitlity, including golfers, other club members and teams from other bowls Clubs. Remarkably they played 12, won 10, drew one and only lost one in a gruelling test of stamina and skill. More details and photos 24 Hours Marathon

11th Sept 2019 - Malaga Summer Championships A Big Hit for Lauro Bowlers
The Summer Championships were held at Mijas LBC this year and the change of venue brought more success to Lauro bowlers.
In the Open Pairs we saw Paul Hughes and Kevin Westwell romp through all opposition with barely a ripple, scoring good wins in all of their matches, taking the Trophy with a typical 21-10 victory. Congratulations to both players.

In the Mixed Fours Ron Jones , Tony Barnes, Julian Thomas and Sue Jones won thruogh to the Final with comparative ease only to have Sue drop out when thier dog Buddy had to be taken to the Vet after suffering an injury. (Don't worry, he is now fine and recovering well) Fortunately they were able to enlist the aid of Jane Richardson for the Final itself, as she hadn't played in the discipline before. The slightly revamped line up still proved too much for their home club opposition and they romped to a 20-7 victory. Congratulations to all 5 of the Mixed Fours team.

A special mention to Hazel Guttridge who reached the Final of the Ladies Singles. Hazel played really well, taking a healthy lead and looking safe before a superb comeback from Marie Carmen Foletti saw her just pipped at the post. Hazel was holding two bowls for game before the final bowl of Marie Carmen trailed the jack back to her waiting bowls to pick up the three shots she needed to win. Congratulations to Hazel for gettng to the Final.
For more information see the Malaga FAB website Summer Championships